We have indoor cats and outdoor cats. I happened to catch this pic of our indoor cats wondering how big that room outside the workshop window was. The ladder is seven feet tall.

Dolce, our outdoor huntress, had a brother named Patches who began making friends with the neighbors. He’d travel from house to house checking out what was for supper and collecting treats from the people who couldn’t resist his charms.

Eventually Patches met neighbor Dan’s fifteen year old cat, Snowball, and started keeping her company. Dan paid us a visit to thank us for Patches. He said Snowball had been on her last legs, refusing to eat, just waiting for death, and when Patches began visiting she perked up. It was as if she was five years younger.

Besides policing the nearby woods, outdoor cats pretty much come and go as they please. Once he began comforting Snowball, Patches would only show up at our house around dinner time to see what was available. After eating he’d disappear until the next evening. We eventually learned that Dan had installed a kitty door and Patches had moved in permanently. It seems that between Snowball and the little door that let him come and go at will Patches decided to relocate. We now see him every month or so making his rounds in the neighborhood. Handsome cat.

Our indoor cats, Dove and Eowyn, pretty much have the run of the house. We installed a cat walk on two of the dining room walls to let the cats prowl around over our heads without worrying about them knocking down glassware or whatever happens to be on the top shelves of our bookcases.

Next to the glider aviary, we built a four-platform tree for climbing that leads up to the cat walk. The surfaces are wrapped in colorful rope and make good scratching posts as well as claw-holds for getting away from the dogs with a treat in your mouth when you’re in a hurry. Our evening Who wants a cookie? ritual takes place on this altar with a different cat on each platform organized according to status.

The laundry room leads from the kitchen to the workshop and has a door at either end. I was blown away one evening when Eowyn seemed to be missing in action and Dove got our attention by stretching full length, putting her paw on the doorknob, and looking back at us. She couldn’t turn it herself, but knew that opening the door involved some kind of action requiring thumbs. Sure enough, Eowyn was stuck in the workshop and had apparently asked Dove for help on whatever invisible cat phone they use. 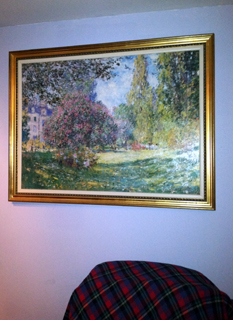 I found Dove one evening sitting on the back of a chair in the living room staring up at a painting on the wall. The scene is of an inviting lawn with trees and bushes in front of a large white building. It seemed to fascinate her, head slowly scanning every detail. Having decided that this might be a nice place to explore, she leaped straight into the center of the canvas, nose first, and falling back down on the chair.

Must be some of that magic glass stuff in the way.

We’re waiting for a cat to try to leap into our flat screen the next time a nature show comes on.

This entry was posted in Diary and tagged career, money, retirement. Bookmark the permalink.