The snow started last evening and continued until noon today – eight foot drifts in places. We watched out my bedroom window as the wind whipped up blizzard conditions most of the night. Parts of the roof are bare and other parts are straining under five feet of snow.

I suppose the weather guys have to be right now and then just to break the monotony.

Problem one this morning was digging out the gate that connects the side yard to our driveway. I started by clearing a skinny path to make room for both Delphine and I to shovel at the same time. A few minutes into the exercise and there literally was no place to throw the stuff. Toss a shovel full on top of the pile in the picture and it will end up back where it started. Somewhere under the pile is a four foot high fence filled with grape vines. We had to guess where the gate was. 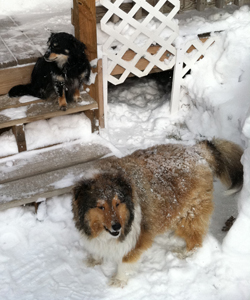 Chase, our thick coated Sheltie (the one smiling with all the white stuff on his back), thinks snow is the best idea we ever had. He eats it, rolls in it, tunnels in it, leaps like a springbok in it. This is the way the world was meant to be.

Kendal, a Chihuahua mix who spent the first two years of his life begging food on the streets of San Antonio (the one on the step who looks as if he thinks we’re all nuts), can’t stand it. It’s cold and wet and he wonders what we have in mind when we load the yard up with it. Humans – go figure!

Having finally dug out the side yard gate, there was still thirty-feet of three-foot deep snow between the gate and the barn door that needed to disappear if we were going to get to the snow-blower. Without digging out the barn door on the outside I wasn’t sure we could slide it open from the inside. But there was no way we could move that much snow by hand.

So we decided to change strategies and try to dig a path to the hen house out back. We sent Chase and Kendal to the hen house with Delphine repeating Check the chickens! a half dozen times. They disappeared under the kitchen porch through the doorway we cleared and ran under the workshop to the backyard.

We went inside to the back cellar door and into the hay room – which had eighteen inches of snow drifted into it through its open doorway. It took twenty minutes just to clear a path through the roofed hay room to get outside.

By the time we got to the chicken yard, Chase had burrowed his way through a few feet of snow under the back deck and was waiting for us. Kendal followed behind on the trail Chase had made. Keep digging – I’m right behind you!

There’s a hen house in that pile at left. We got the doors exposed and found the hens were fine. Their heater was running, the dish warmer kept their water from freezing, and the ladies had eggs waiting for us in their nesting boxes. The hens looked out the door and hopped back up on their roost. There was no way they were going to hunt for worms in that freezing white stuff – which was just as well because the fence around the chicken yard was now buried and who knows where the chickens would end up in the frozen landscape.

Having cleared a path to the hen house, it was time to tackle the barn. We muscled the four-hundred pound barn door open and I gassed up the snow blower. It’s always iffy getting it to turn over. Just start this one more time and I promise I’ll buy a new one for the next storm. Happily there’s an electric start and after five minutes of cranking noises the gas engine finally kicked in. It feels like administering CPR every time I do it. It’s alive! It’s alive!

I started snow-blowing the driveway. The stuff was so deep that the blower tunneled under the surface of the snow. I pushed and shoved the blower down a hundred-feet to a six-foot-high mountain the town snowplow had left at the end of our driveway. It took two hours to break through to the street. Behind me were two humps of snow where our cars still lay buried. We hadn’t even begun to make the driveway passable.

We spent four hours clearing snow today – and have four more hours ahead of us tomorrow. The aches and pains will show up shortly, but oddly enough all this physical labor is deeply satisfying. I wouldn’t want to spend time digging random holes in the ground just for the hell of it – but if Mother Nature insists on challenging us like this there seems to be something noble about coming out on top.

One more time I marvel at how the guys who built our house a hundred years ago managed all this. No snow-blower, shovels made of wood, no heater in the hen house. I imagine a rugged farmer waking some winter morning to thirty-eight inches of snow, turning to his wife and saying, “We’re gonna need to make more kids.”

I suppose it was do or die. Literally.

This entry was posted in Diary and tagged blizzard, Nemo, Sheltie, snow. Bookmark the permalink.